[SIGPLUS_EXCEPTION_SOURCE] Image source is expected to be a full URL or a path relative to the image base folder specified in the back-end but PHOTOGALLERY FORUM is neither a URL nor a relative path to an existing file or folder.

From prioritisation to action: the GCNI collects the proposals of Collective Action formulated by sustainable development actors at the SDGs Forum 2017 (Lucca) 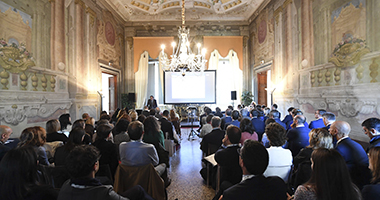 The second edition of the Italian Business & SDGs Annual Forum, promoted by the Global Compact Network Italy (here after GCNI), was held on 26th-27th September 2017 in the splendid medieval-Renaissance town of Lucca. The event was hosted by the Sofidel Group and organized with the support of A2A and Edison.

The activities began on the evening of 26th September, with a Networking Dinner reserved for participants in the Forum at the "San Colombano" restaurant, built in an old rampart of the old town walls. Before the dinner there was a cultural tour of the city and a visit to the "Giacomo Puccini Museum".

This year the Forum brought together over 100 representatives of profit and non-profit organizations committed to the implementation of the UN 2030 Agenda and its 17 Sustainable Development Goals. Alongside companies of all sizes that are active in various sectors, there was a significant and active presence of institutions: first of all, the Ministry of Foreign Affairs and International Cooperation and the Municipality of Lucca, which offered to sponsor the event together with Confindustria Toscana Nord - Lucca Pistoia Prato.

On 27th September, in Palazzo Pfanner in the historic center, Valentina MERCANTI - Councilor for Economic Development of the Municipality of Lucca - opened the day with institutional greetings, and introduced the work organized by Marco FREY - President of the GCNI, who shared the results of the first edition of the SDGs Forum held in 2016 in Venice (San Servolo) with those present and, following on from that, presented the objectives towards which the ongoing initiative and the work modalities that characterized it were directed.

"The new Universal Agenda, signed in September 2015 by the governments of the 193 UN member countries, is an action program for people, the planet and prosperity that requires an integrated approach to sustainable development and collective action, at all levels, to face the challenges of our times. Therefore, this second edition of the Forum - subtitled "From Words  to Action" - will be managed in a participatory fashion for working groups with those discussion topics related to the SDGs considered to be priorities at national level. The actions that will be planned will be carried out during 2018 and will be coordinated by the GCNI Foundation." (Marco Frey, GCNI President)

Sofidel Group CEO, Luigi LAZZARESCHI’s speech further enriched the opening of the Forum. Through his voice, the Group first confirmed its strong commitment to the Global Goals 2030 and the 10 Principles of the UN Global Compact, as well as its support to the GCNI TenP Project, for the promotion of sustainability throughout the chain of supply.

"Businesses today see their horizon of responsibility widen and their role in affirming truly sustainable development becomes ever more relevant. Bearing this in mind, I am convinced that the correct implementation of the United Nations Sustainable Development Agenda will only be possible through the creation of strong partnerships between governments, companies and civil society, as is the seventeenth objective of the Agenda itself. This is another reason why Sofidel is pleased to host the second edition of the SDGs Forum, which will see all these people working together to create the conditions for socially and environmentally responsible development" (Luigi Lazzareschi, Sofidel Group CEO).

At the end of the introductory session and throughout the morning session, the Forum participants worked in parallel thematic sessions to develop and share some of the Collective Action proposals for sustainable development. More specifically, 4 working groups were organized which were focused on the following topics: 1. The sustainable promotion of the supply chain; 2. Social (and economic) inclusion of the weakest categories; 3. Development of the circular economy; 4. Actions to support the least developed countries.

The activities of each Group have been enhanced by the participation of a thematic expert:

The sessions were managed by a facilitator who used the charrette technique as a reference method. It is a technique specifically designed to encourage the work of designing in parallel between groups, the creative fusion of ideas and, where possible, the development of shared proposals. Each Group used a canvas specifically designed for the meeting to develop collective action proposals. 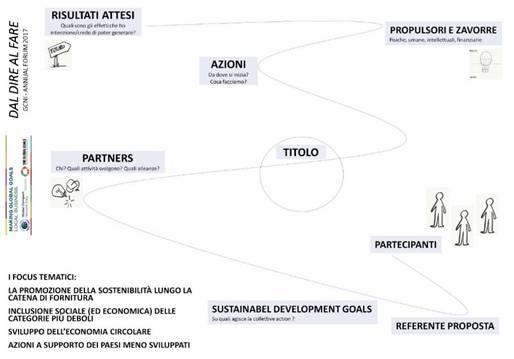 Here follows a list of collective action proposals that emerged from the thematic sessions:

THE SUSTAINABLE PROMOTION OF THE SUPPLY CHAIN

SOCIAL INCLUSION (AND ECONOMIC) OF THE WEAKEST CATEGORIES

The second part of the Forum was dedicated to a presentation and discussion in plenary of the collective actions defined by the working groups. Each proposal was presented by the keynote speaker and group representatives. On the basis of these proposals, under the guidance of Marco Frey, everyone present worked to highlight transversal issues and bring out a series of converging ideas and actions.

This led to 7 collective action projects. For each of these projects the participants gave an indication of priorities that rewarded the following two proposals at the end: UNCHAIN THE CHAIN - COMMUNICATE AND INNOVATE IN THE CIRCULAR ECONOMY.

In conclusion, if the first Forum had made possible - through dialogue and comparison between firms, organizations and universities - the identification of priority themes (connected to certain SDGs) on which to launch an action in partnership, the 2017 edition brought together the actors of sustainable development around several tables and allowed the formulation of new hypotheses of future collaborations for the 2030 objectives. The global partnership, indicated in the UN Agenda as the main route towards a more equitable and inclusive world, therefore meets the interest, availability and efforts of the subjects to whom the Agenda is addressed at a national level.

In line with its declaration of commitment to collect the inputs that would emerge from the Lucca Forum, the GCNI has recently approved its activity program for 2018 which will be largely focused on the implementation of two Collective Actions respectively oriented to the promotion and effective management of the sustainable supply chain; enhancing innovation and communication in the circular economy sector.

In the next issue of the Newsletter, the objectives and appointments associated with each of the two collective actions will be presented in greater depth and detail.